Make me a Champion! 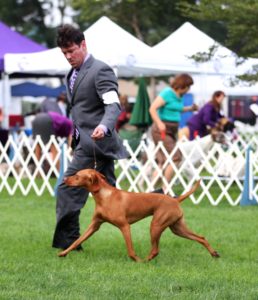 Here’s the skinny on getting your AKC Championship — you might have to read it and then go watch a dog show live.  Seeing it in person makes it a lot easier to understand, but we will do our best!

There are now two different titles you can get in from the AKC; Championship and Grand Championship.  Let’s start with the first title, the Championship or CH.

To earn you Champion title you must:

To earn points, you must beat all the other dogs in your sex classification.  In other words, you have to be the best dog or bitch in the eyes of the judge.  The judge compares each dog to their standard.  Click here for the Vizsla standard. In their mind, the judge will point out the boy and girl that most closely meets that standard.

All the boys and girls entered in the classes are cleverly called “class dogs” or “class bitches.”  There are several classes for the dogs and bitches to compete in — Puppy (6-9, 9-12, or sometimes 6-12 months), 12-18 month, American bred, Amateur-Owner-Handler, Bred-by exhibitor, Open.  They are pretty self explanatory.  You have to fall into the age group to qualify for the ones by age, you have to be an owner (and amateur) for AOH, you have to be the Breeder (and be listed as an owner) to show in the Bred-by class, and the Open class is Open to any dog!

For the purposes of making this easy to understand, let’s say you entered a boy (dog) in the Open class.  When it is time for the Open dogs to enter (usually the last class) you would go in the ring and compete against any other dogs that were also entered in the Open class.  Whomever is selected for 1st place will move on to compete for Winners Dog.  The Winners Dog competition includes the first place winners from all the classes (as long as there was an entry.)  Let’s say there is a 6-9 puppy, a 12-18 dog, a Bred-by, and your dog from Open.  The judge will re-evaluate these 4 dogs (all 1st place winners) and pick who she thinks is the best as her “Winners Dog.”  We are naturally going to pretend it was the Open Dog.  At this point, whomever went 2nd place in the Open Dog class comes back into the ring and is considered with the 6-9 puppy, 12-18 dog, and Bred-by dog for “Reserve Winners Dog.”

Since your Dog went Winners Dog (WD) he gets the points!  The dog chosen as Reserve does not get any points, but it is always nice to know you were close to getting the points!  To figure out the points, you have to refer to the AKC point schedule – this link is for Colorado’s region.  This point schedule is broken up by regions and is based on a 3 year average of entries.  Luckily, they always print the point schedule for your breed in the catalog, so you don’t have to always refer to the website.

Continuing on this example, let’s say there were enough dogs entered to earn you two points.  So by going WD, you know how two points toward your Championship, and you could potentially still earn more!  After the boys show, the girls have the exact same procedure to find the Winners Bitch (WB.)  After the WB is selected, both the WD and WB go into the ring with all the specials.  Specials are dogs that have already earned their Championship title.  This is now the competition for Best of Breed.

In Best of Breed the judge will pick out the Best Vizsla (or whichever breed) in the ring — boy or girl.  This does not have to be a Champion, so your Winners Dog is being considered!  Let’s say the judge selected one of the Champion females for Best of Breed (BOB.)  Since a girl was chosen for BOB, the judge will find a male for Best of Opposite Sex (BOS)…again — your boy is being considered!  The last place you will be considered is for Best of Winners (BOW.)  This award only comes down to you and the WB.

Let’s do two different examples here.  First, let’s say you are chosen as BOS.  If there were male Champions in the ring, then you get credit for them towards your point total.  Let’s say there were 2 male Champions, you would add two more boys to the number you already defeated in the classes.  Referring back to the point schedule — you now qualify for 3 points instead of just two!

For the second example, we will give you BOW, but not BOS.  Since you went BOW, you now get credit for the WB points.  She doesn’t lose her points, but you just get to bump up your points if WB was worth more than two points.  Let’s say it was a 4 point major in girls — this means you get 4 points for the day!

In both examples the 3 points and 4 points supersedes the 2 points you won earlier.  Does that make sense?  Clear as mud?  The only other thing worth mentioning — earlier we said you needed two majors.  Majors are defined as a 3, 4, or 5 point win.

For the GCH you need:

You get points for the Grand Champion title by going BOB, BOS, Select Dog (SD), or Select Bitch (SB.)  We have already explained BOB and BOS.  SD and SB are easy to understand!  They are the second place dog and the second place bitch, and only Champions can be selected, so your Winners Dog is not in contention for SD.  The points work with the same point schedule, but if works slightly differently:

BOS — gets credit for all the dogs of their sex.

SD — gets credit for all the boys minus 2.  So if there were 10 total dogs, then SD gets the points that correspond to having 8 dogs entered.

SB — gets credit for all the girls minus 2.

Easy peazy, right?  Also worth mentioning that you can’t start earning GCH points until you already have your CH title.