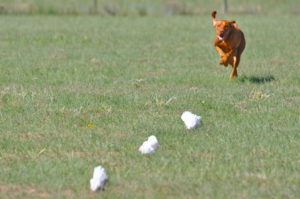 There is this AKC game called Lure Coursing; a game Sighthounds get to play.  In this game, lures are attached to a motorized cable, which has been set up in a specific course.  The cable has pieces of plastic attached to it, which surprisingly looks a lot like a bunny when in motion!  Hounds are expected to sight and chase the lure and are run individually or can be put in threesomes during a trial.  This  is a very basic overview, but you get the idea.

February 24, 2011, the AKC opened up this exciting game to all breeds.  After all, Sighthounds aren’t the only dogs that display prey drive or the desire to chase.  Vizslas are particularly well suited to this sport.  The Magyar nomads were just that – nomadic.  They needed a versatile dog who could work different cover and hunt different game.  Vizslas have been used as small game and wild fowl hunters since the beginning, and now there is a way to showcase their prey drive for small game – the Coursing Ability Test.

Coursing Ability is a pass/fail (non-competitive) event where the dogs run singularly.  If you watch the Sighthound version, you will notice they run in duos or trios and it is a competitive event.  To be eligible to enter, your Vizsla must be at least a year old and be registered with the AKC, or have a PAL number.  The idea of the game is to have your Vizsla run a 600 yard course with enthusiasm and within the two minute time frame.

On May 21, 2011, Ch Russet Leather’s Wild Sundance RN CA became the first Vizsla to earn the Coursing Ability title.  “Redford” is Uncle to our Karma and the news of his accomplishment sparked our interest; we knew we had to give it a try.  Luckily, it wasn’t too long before a coursing ability test was offered here in Colorado, so we sent in our entries and waited anxiously for the test.

At the first trial, we learned a lot of the ropes.  Everyone has to be onsite for roll call and inspections at the beginning of the day.  Once all the dogs have been inspected and are cleared (they look for any signs of injury or females in heat) the games begin!  Coursing ability was after Junior Coursing and qualifying runs, so we were able to watch the Sighthounds work the field.  It was so cool.  We laughed at the experienced dogs who anticipated the turns and cut across the field to get ahead of the lures.  We were impressed with the lure operator who keeps the lures far enough in front of the dogs so they can’t catch them, but close enough that the dogs don’t lose interest.  It was a lot to take in and we loved it!

After the Sighthounds had their go, all of us newbies got to play.  There were ALL kinds of breeds — Westies, Border Terriers, Golden Retrievers, Manchester Terriers, Cattle Dogs, Chinese Cresteds, and our two Vizslas!  Everyone had a really great run and we were all pretty excited that our breeds get to play this game now too!  Karma and Indy first saw the lures that day during inspections.  The officials were doing a practice run to check the course and as soon as our V’s saw the lures, they paused, perked up their ears, and lunged towards the lures!  Thankful we had them on a leash, we walked back to our set-up with a feeling they would do great!

And they did!  Karma and Indy both had great runs — even garnering compliments from the judges both days.  So with back-to-back qualifies, Indy and Karma just needed one more leg to earn their CA (coursing ability) title.  We had our eyes peeled for another opportunity to run our dogs, and then, there it was; a limited entry opportunity in Wellington, Colorado.  We jumped at the chance and got our entries in the next day.  We also discovered that if Indy and Karma finished they would be the second and third Vizslas to earn a CA!  Not only that, Karma would be the FIRST FEMALE Vizsla to earn the title — nothing like making AKC history!

The Wellington trial was another slam-dunk for Indy and Karma.  They love chasing plastic bunnies!  A friend of ours who is a Basenji (a Sighthound) breeder, came to watch and was so proud of our Vs.  She started calling Karma her little Vee-senji!  She was so impressed with how well our Vizslas ran that day, she said they even did better than a lot of the Sighthounds she watched; a very nice compliment.

When people find out we have ventured into lure coursing, they ask how we trained for the test.  We didn’t.  This was pure instinct and prey drive.  If anyone has ever seen their Vizsla chase a rabbit or squirrel, you know they have it!  Many coursing clubs offer fun runs as well, usually $5 or so a run.  It’s a good way to see if your dogs will chase and if this game is one you want to play.  If your Vizsla doesn’t chase, there are ways to train, just ask the folks at the fun run for tips!

And for those of you who don’t want to let your dog chase for fear it will ruin them in the field:  Indy (our Master Hunter) went out to work birds with Karma a week after earning his CA.  He was a good boy – steady to wing and shot.  I’m a firm believer that they know their jobs and the difference between the events.  I don’t know about your Vizslas, but ours LOVE having a job – and coursing was a big hit!

Earning titles is pretty easy to keep track of too.  Three passes earns your dog a CA or Coursing Ability title.  Ten passes (seven more after your CA) earns you a CAA title, Coursing Ability Advanced.  If you really catch the bug, you can go after the CAX title (Coursing Ability Excellent), which can be accomplished with 25 passes!

If you want to see what a coursing run looks like, it’s very easy to find them on YouTube.  Just type in “Vizsla Coursing Ability” into the search bar, and you are sure to find some fun videos to watch!

How do you find a coursing trial?  It’s simple enough, just bookmark this link – it is updated regularly as trials are planned: http://www.akc.org/pdfs/events/coursing_ability_test/CAT_Upcoming_Events.pdf