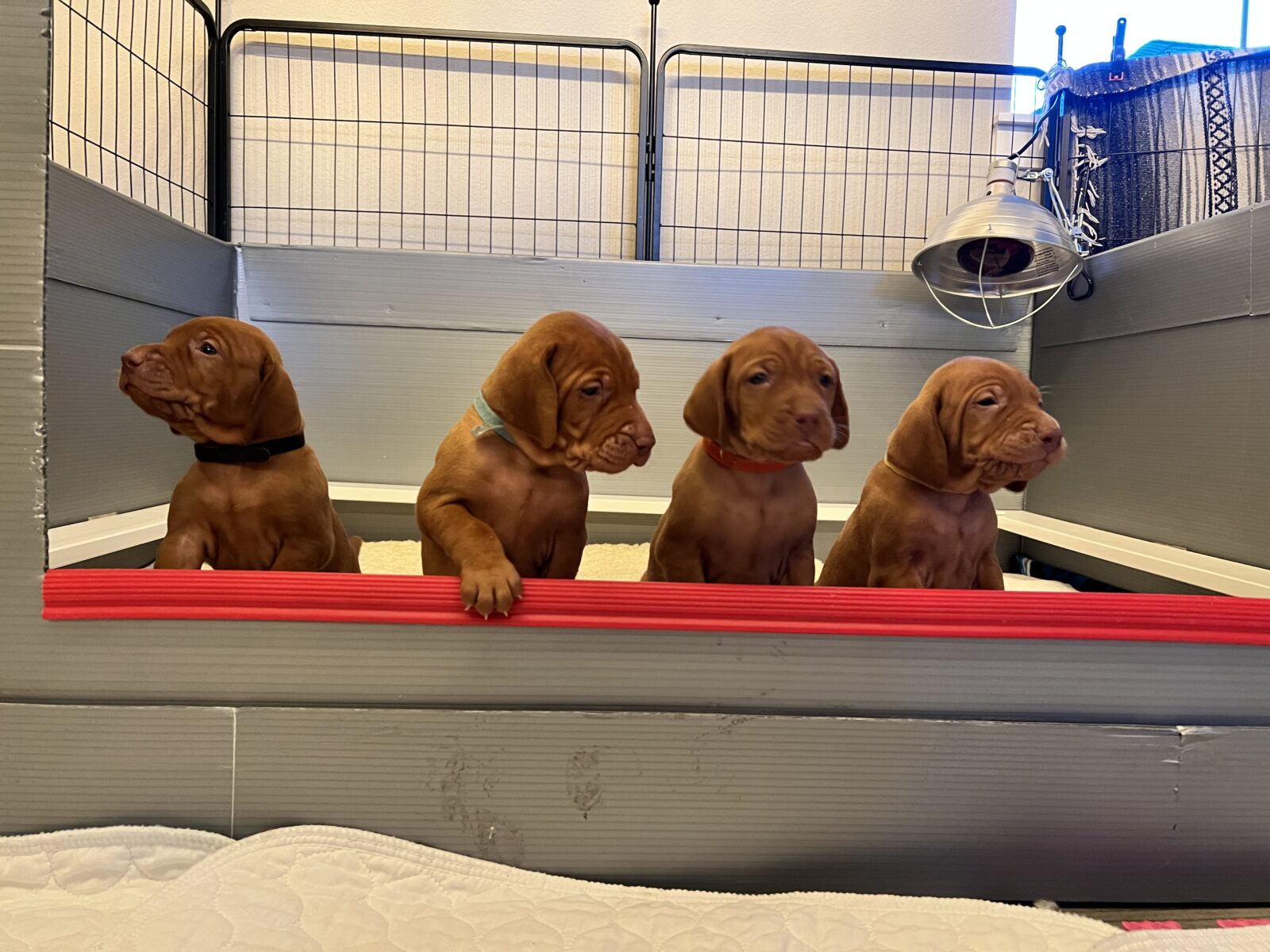 As mentioned last week, the puppies were finally ready for visitors, and boy did they have them! David, who will be getting one of the boys got to come by and we finally met in person after FOUR years! He was originally on our list for one of Halo’s puppies but then had to back out at the last minute. 6 months later he was back, and although I tried to refer him to other breeders, he really wanted to wait for something out of my line. So here we are 4 years later and I couldn’t be more excited to give him a pup! He already has training lined up, vet appointments made, and has done so much research on puppy prep and ownership. Seriously, one of these boys is really going to luck out with him as an owner 🙂

The other big milestone this week was expanding the puppies into a larger play area as they started to escape the whelping box this week. They love having the extra space to romp, pounce, kill-shake, and tug around with their toys.

The puppies also got a visit from Lauren and Bo (Louie’s parents!) Lauren and Bo were so sweet and came bearing gifts for the puppies AND for all the adult dogs in the house. Cheeky was especially excited to see her Aunt & Uncle and they couldn’t get over how Cheeky has so many of the same mannerisms as Lou! It was super cute. We all stayed up way too late, but it was the best visit and way to spend a Friday night!

The puppies are learning to be real dogs and are starting to get a lot of one-on-one time to hopefully help with human bonding and prevent separation anxiety from their litter. It’s crazy to think we are halfway through their time here; it’s all just going so quickly.

9.12.22 -- Boujee debuts in the show ring on her 6 month birthday and takes Reserve Winners!
9.11.22 -- Charlee again wins Best Beginner Vizsla Puppy and goes on to a Group 4 placement!
9.3.22 -- The girls tear it up in their conformation debut! Competing in 4-6 beginner puppy, Charlee takes Group 1 in Augusta, NJ! Later that afternoon, Boujee repeats the Group 1 win and goes on to take Beginner Puppy Best in Show!!
5.7.22 -- The Spiderlings headed to their new homes today! Fang is now Miles and lives in Louisville, Venom is now Nigel and lives in Nederland, Itsy Bitsy is now Charlee and lives in New Jersey, and Charlotte stayed with me and goes by Boujee. Go be amazing my sweet Spiderlings!
3.12.22 -- Happy birthday Spiderlings! Cheeky had 2 boys and 2 girls today, meet Fang, Venom, Charlotte, and Itsy Bitsy!