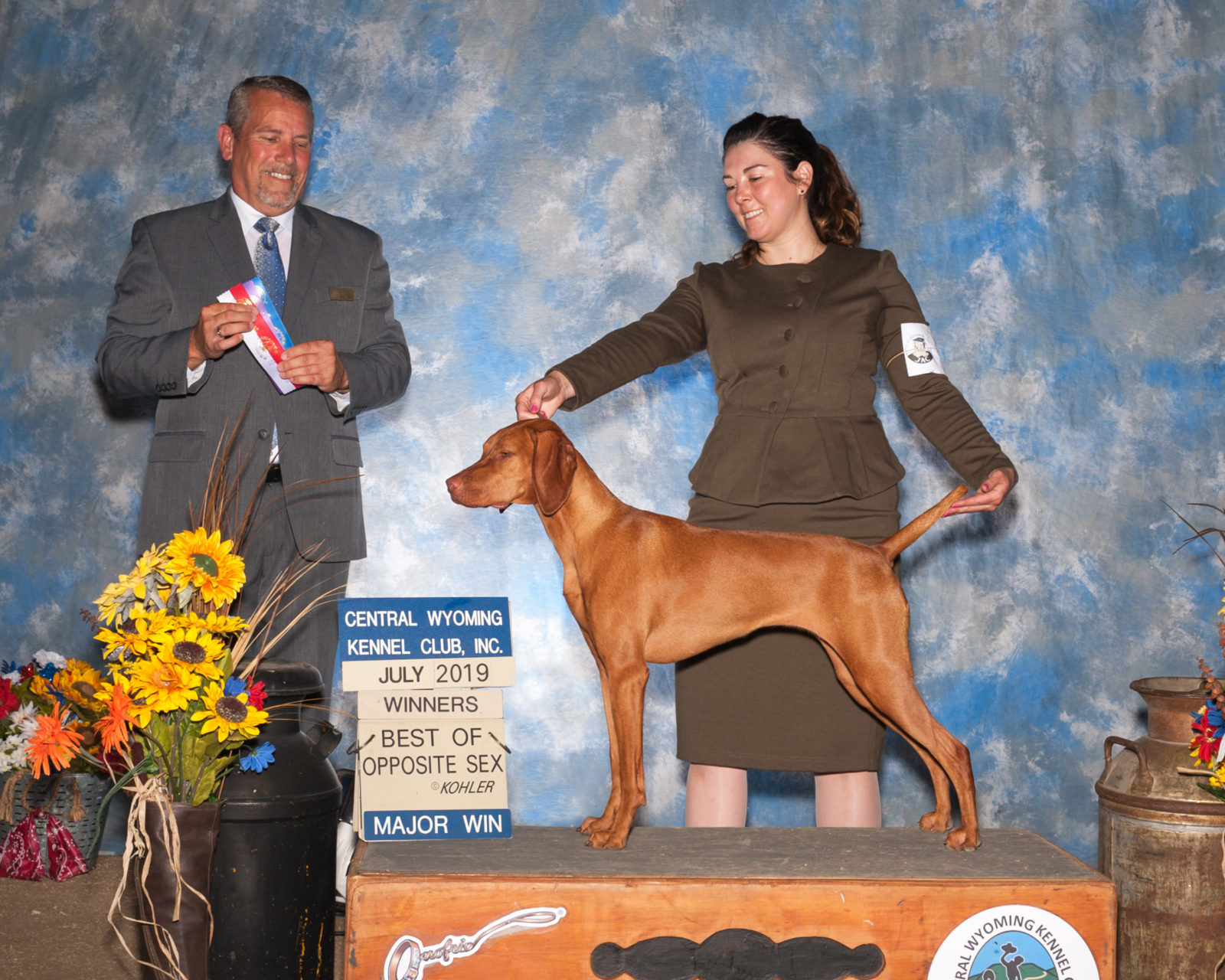 Wyoming road trip is in the books and WOWZA! What an exciting weekend we had! Several weeks ago, Jenny saw the panel for Wyoming and saw that the judging line up was a fantastic line up for puppies — Desmond Murphy, Anne Savory Bolus, and James Noe. So she called up her girlfriend Lindsay to see if she wanted to bring her puppy, Marmalade, along for some good ring experience. There would also be dock diving and barn hunt, so it seemed like a fun weekend was there for the taking. As the show got closer to closing, we became aware we may be able to build a major in boys, so Jenny entered Louie for a weekend away too.

Friday was the first day of the show, and Jenny was able to get some work done and STILL have time for some show fun. Louie and Cheeky were very distracted by the dirt floor and did not walk out of the ring as winners, but their half brother Gus took Best of Breed and a Group 3 and Owner Handler Group 1! While waiting for Groups & Best in Show, Jenny and Lindsay took the puppies out to try dock diving! Louie, Marmalade, and Cheeky all managed to swim off the ramp and seemed to have a pretty great time!

After Best in Show, we took all the dogs to run around at this awesome dog park. Cheeky decided she was part Labrador and went out into the strong current after the tennis ball with the Labs. Very stressful as a Mom to watch, but she handled herself well!

The dogs had the BEST time. They ran 100 miles an hour up and down the shore. Chasing, swimming, leaping, and in general having a completely great time. We definitely burned off some steam after the road trip and a long day at the show site!

Then, with a bunch of tired happy dogs, we headed to dinner at this place called The Office. They had a patio that was perfect for chips, salsa, and margaritas, and we were able to keep an eye on the pups!

Saturday, Cheeky won her class and went Reserve to the major which finished her Puppy of Achievement title! This was pretty exciting. To earn the Puppy of Achievement title, you only earn points in your class, getting nothing extra for going Winners. You also have to complete it before you turn one. Here are the regulations if you want to check it out, it was a fun goal to go after: https://www.akc.org/sports/conformation/puppy-of-achievement/getting-started/

Anyway, getting that goal checked off the list was very fun! And since we wanted to watch Gus in the Group rings, we tried Dock Diving again today. Cheeky even jumped off the dock!

After swimming, half brother Gus had another great day going Reserve Best in Show and Owner Handler Best in Show! His prize for Best in Show was cash, so Gus treated us all to dinner at The Office again! It was such a great spot, we went back!

Today, we had a judge change to Dana Cline. Yep, the same Dana Cline that gave Cheeky a point in Seward on the way to Nationals! Seward was a small show, but we were pretty excited because he really seemed to like her there. Sure enough, he again gave Cheeky Winners Bitch and again gave her Best of Opposite over a special!! When we were in line for pictures, he said he remembered her from Seward!! That’s the first time we’ve ever had a judge tell us they remembered our dog; an amazing compliment and feeling! The Best of Opposite win was good for a FOUR POINT MAJOR!! The first time Jenny has ever put a major on our dogs. A very special win for sure 🙂 Also a great day for her half-brother, Fin, who finished his Championship, and her half-brother, Gus, went Group 3 and OH RBIS! Needless to say that trip home went by pretty quickly!

A big thank you to Lindsay for jumping in on our crazy idea — it was a super fun girls weekend, and Cheeky loves her new bestie, Marmee!