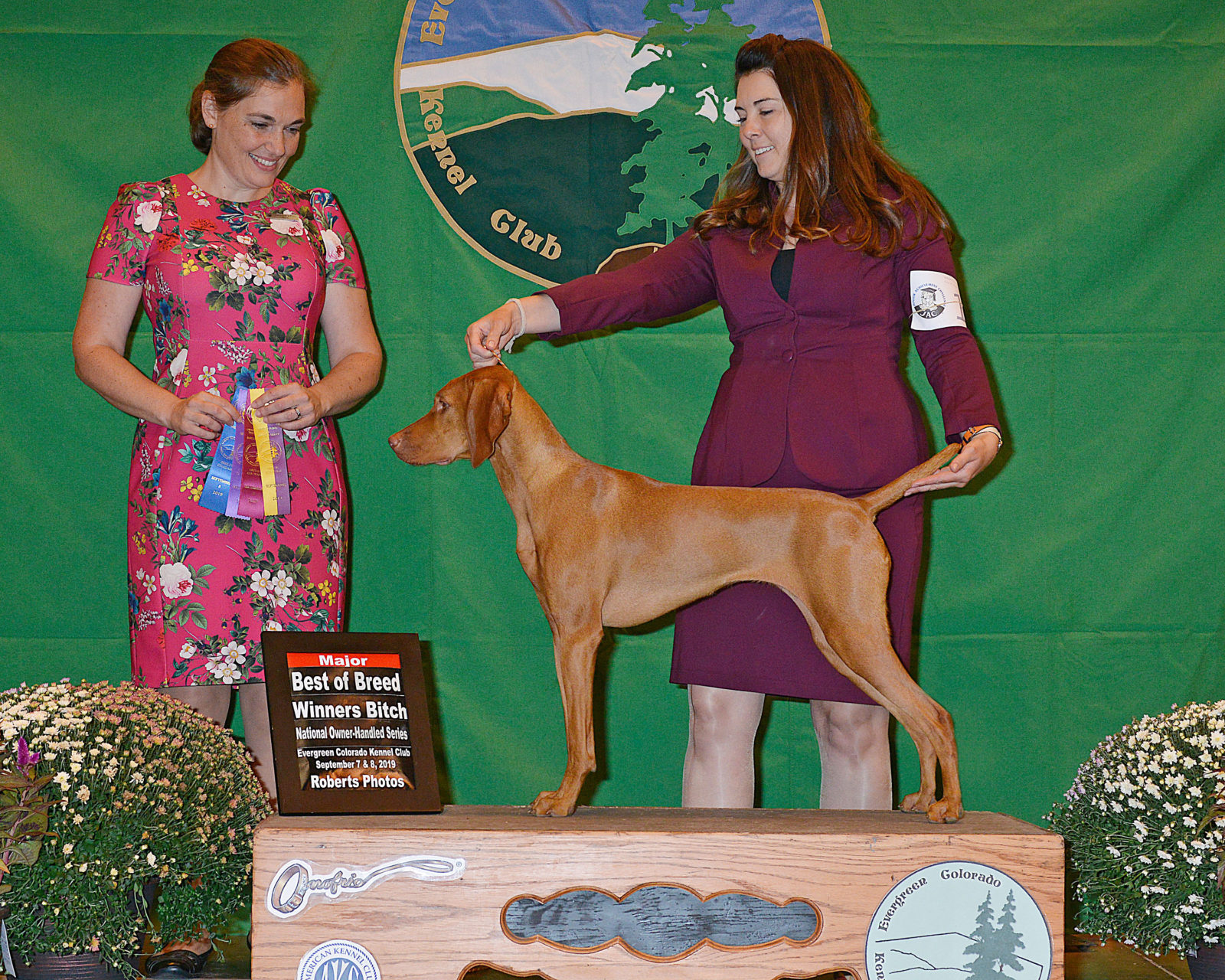 Floating, absolutely floating home to Denver this weekend! It has been an absolutely fabulous few days and it all kicked off with Karma. The Pharaoh Hound Club of America held their National in conjunction with the Evergreen Cluster this year. One of Jenny’s very good friends, Darci has Pharaohs and was the overall chair planning everything. Wanting to support Darci, Karma was entered in agility and ending up WINNING both Jumpers and Standard! This makes her 11th QQ towards her PACH!

Next up was the Mile High Sporting Dog Fanciers group shows. As members, Jenny orders all the ribbons and we pitch in a helping hand where we can. We were also excited because Catherine was going to be showing Maggie too! At show #1, Cheeky managed a Best Vizsla in Sweepstakes followed by a Group 3 in Sweeps and a Best Bred-By Vizsla with a Bred-By Group 2! That felt pretty darn fab! Both wins came under GSP Breeder/Judge Karen Nauer which felt pretty fantastic! Karma also went Best Vizsla Veteran, but had to skip the group ring because she was enrolling in the Canine Cancer Vaccine study (more on that to come!)

In the 2nd show, it was Maggie’s time to shine! First up, she went Best Vizsla in Gun Dog Sweeps from the Junior Hunter class. Then she and Catherine took a spin in the breed ring and won Winners Bitch for a 3 point major!! Then when she went back in with all the specials for the final spin, judge Barbara Burns pulled her out for Opposite Sex over 3 special bitches! That bumped up her win to a 4 point major! We didn’t think we could be more proud of Catherine, but then she and Maggie picked up a Gun Dog Group 4!!!! As breeders, we are just elated! We are so thankful for Byron and Catherine and all the hard work they have put into training Maggie for both show and field.

Finally, today, Cheeky and Jenny were entered again as we were very excited to show to Vizsla breeder, Alessandra Folz. It was quite an honor to have Alessandra point to Cheeky for Winners Bitch. However, that’s not all we had in store, as she also chose Cheeky as her Best of Breed! What. A. Thrill!! Cheeky automatically won Best of Breed Owner Handler and we followed that up with an Owner Handler Group 3! Playing in the big girl Sporting group was pretty fab too, lots of room for Cheeky to show off that floaty, lovely movement.

So very proud of the Baby Halo Girls this weekend!